By Darren McKellin and Michiaki Tanaka 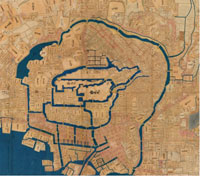 The long, lawless Warring States period in Japan ended when Ieyasu Tokugawa was victorious in the Battle of Sekigahara (1600).

In 1603 the emperor granted Tokugawa the title of shogun, and in the same year, Tokugawa established his new capital in a small fishing village called Edo, which was eventually to be renamed Tokyo.

Tokugawa’s advisors considered Edo, and especially the area that is now Nihonbashi, to have the most powerful feng shui energy in the country. Then, feng shui was considered practical expertise, with all major construction based on its principals. The brilliant feng shui master Tenkai—one of Tokugawa’s closest advisers—recommended that Edo be the new capital, and Tokugawa’s great castle was built there to be at the center of this energy.

Mountain and bay
The main reason Tenkai chose Edo was that the Kanto Plain is surrounded by mountains which, looking much like a giant bowl, funnel energy into the area.

Further, the water energy created by Tokyo Bay is held inside the plain by the mountains and cannot disperse. This allows the energy to increase and benefit the city.

The Kanto Plain is surrounded to the south, west, and north by mountains, and Tokyo Bay to the east. In feng shui, the configuration is known as mountain support.

This basic principle can be used when choosing an office or home. The front of any office should face into the light and there should be a solid wall at the back of the building, or a larger building behind for support and stability.

Utilizing numerous feng shui principals, Tokugawa laid out the new capital with his castle at the center, and surrounded it with circular canals and moats, many of which remain today.

According to the water dragon formula of feng shui, water surrounding a house (or castle), and flowing in the correct direction, creates huge wealth.

Mount Fuji
Another reason Tokyo was chosen is its proximity to Mt. Fuji, which had been revered for centuries as a sacred mountain.

The beauty of the solitary mountain rising above villages and tree-fringed sea and lakes has long been the object of pilgrimages and has inspired artists and poets.

By the 12th century, Mt. Fuji had become the center of training in ascetic Buddhism, which included Shinto elements. Even then, it had already been recognized that positive energy is created within sight of revered and sacred symbols.

Modern days
Although 500 years ago Tokyo/Nihonbashi was considered the prime center of feng shui power in the land, it doesn’t necessarily remain so today.

The Tokyo of the 1600s was completely different from the city of today. Most of the canals around the Imperial Palace have been filled in.

In addition, there are many roads and train lines that lead into the city center, bring with them energy from the rest of the Kanto Plain.

Shinjuku, with its numerous skyscrapers, thus has considerable energy, comparable to that of a mountain. This shows that feng shui is not static but, as everything in life, is always changing.

Some 500 years ago Tokyo and Nihonbashi became the center of power in Japan due to auspicious feng shui elements in the area. To date, the results have been positive.

So it was that, once Tokugawa had set up his powerbase near Nihonbashi, Japan’s Warring States period ended. An era of peace and prosperity followed, and the arts flourished.

During the Meiji era the Imperial Palace replaced Tokugawa’s castle near Nihonbashi, Japan opened up, and the nation quickly became a world power.

Despite the massive transformation that Tokyo has undergone over the past 500 years, the city still is imbued with auspicious feng shui elements and energy. It’s winning ways appear likely to continue through to the 2020 Olympic and Paralympic Games—and, it is to be expected, beyond.